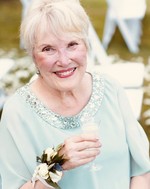 Anne traveled overseas extensively, living in Trinidad, British West Indies, New Delhi, India and later in London, England. Anne and her husband Roy resided in Hamlet for many years, where she was secretary of the First Presbyterian Church.

Anne was a loving, devoted mother to five children: Roy, Jr, Linda, Steve, Julie and Paul. A woman of strong faith, Anne was loved by all those she knew and touched. Friends and family alike adored Anne as a sweet, gentle, kind-hearted soul, full of grace and beauty. She was an accomplished artist and loved teaching and doing crafts of all kinds with her daughters and grandchildren.

A Graveside service will be announced at a later date due to Covid environment.