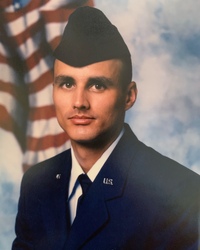 He was born in Richmond County, January 31, 1973, son of Robert Wayne Meece and the late Loretta Barnes Binkley.

Tommy was a veteran of the United States Air Force.

He loved music and was an avid guitarist and songwriter. He had a funny, witty personality and was a jokester, yet displayed a caring, big heart at the same time. Ford Mustangs were his vehicle of choice, owning several throughout his life. He enjoyed the water, especially the beach, and enjoyed watching football. His love for animals showed with his love and care of his own dog, like his child, “Pip”.

Tommy was preceded in death by his mother, on July 16, 2022, Loretta Barnes Binkley; son, Nathan Andrew Meece; and his beloved dog, Pip.

The family will receive friends Wednesday, August 3, 2022, from 12:00-1:00pm at Harrington Funeral Home, Hamlet. At other times, the family will be at the home of Tommy’s father and step-mother, 246 Lakeview Trail, Rockingham.

The funeral will follow the visitation, beginning at 1:00pm in the chapel of Harrington Funeral Home, with Rev. Donnie Nuttall and Pastor Steve Gilmer officiating. Burial will follow at Richmond County Memorial Park Cemetery, Rockingham, being laid to rest next to his mother.